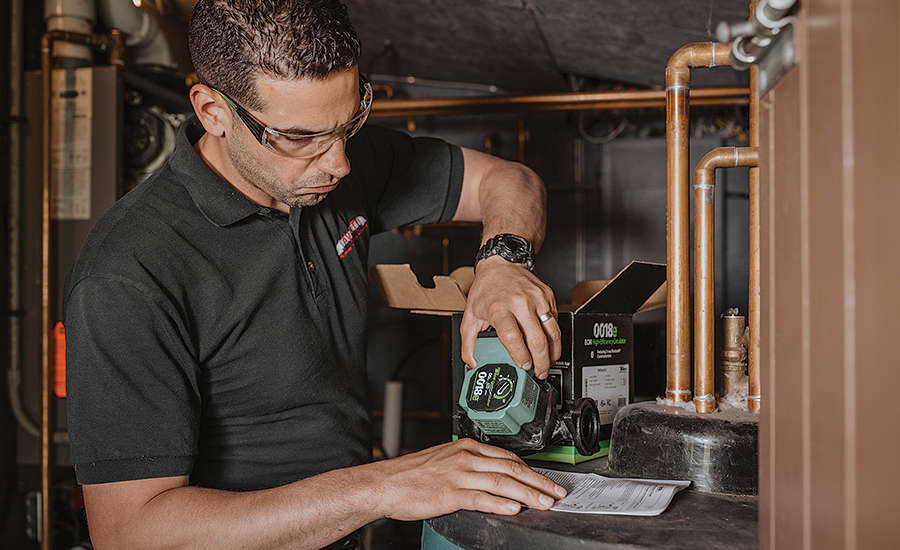 This is the West, sir. When legend becomes fact, print the legend.”

That prophetic little quote from “The Man Who Shot Liberty Valance” pretty much sums up where our industry is today with residential ECM circulators. So many myths, many of them downright crazy, make it nearly impossible to make clear-headed and smart decisions for your customers.

With that as a backdrop, let’s do a little myth-busting, shall we?

Myth: ECM circs can do everything

Well, no they can’t. They can do a lot of things, but everything isn’t one of them.

Whenever someone presents a pumping problem in an online forum or on social media, invariably someone else chimes in with, “Just throw a variable speed pump in and be done with it.”

Variable speed circulators are very good circulators, but they can’t, for example, size themselves. They also don’t do the thinking for you, nor do they take the thinking out of it. And for goodness sake, they’re not freaking “magic.”

Believe it or not, I’ve heard those very words — “ECM circulators are magic” — come out of the mouth of a so-called “industry expert.”

As a trainer, I’m lucky enough to speak with thousands of industry professionals every year. I learn a lot when we get together, and I love asking questions because they’re always ready to answer. For instance, I like to ask, who in a given group is using variable speed circulators, and who isn’t. The follow up question, of course, is why, or why not?

This is where more myths start floating to the surface.

What sort of efficiency? The typical answer: “Electrical.” OK, how much electricity will it save? “Butt loads.” We’re talking about itty-bitty residential circs which, at most, are in the 80- to 85-watt range. In reality, we’re talking about a very small butt.

Many trade pros are being told ECM circs save a lot of electricity. That is, in fact, true. The marketing department may tell you they provide an 85% to 90% reduction of electrical consumption, but a calculator will tell you the rest of the story. Depending on what you pay per kilowatt hour, that electrical savings may translate into $3 to $5 per month during the heating season.

What does that mean? It means that within two, maybe three years after installation, the added cost of the circulator (depending on which one you buy) will be offset by the estimated $28 to $35 you save each heating season. In other words, your customer is going to buy the variable speed ECM circulator no matter what; it’s just a question of whether you give it to him or not.

Variable Speed ECM circulators certainly do provide electrical savings, and it’s not insignificant. But it’s a bit of a stretch to classify it as a buttload.

Myth: They always give me the right flow

That’s mostly accurate. But the statement’s missing only two words.  “. . . hardly ever.”

This myth ties back to that “magic pump” nonsense. ECMs aren’t magic. They don’t think for you, and they aren’t a plug-n’-play electrical component. Dedicated trade pros should demand answers about how these things work. They can’t always deliver the right flow because most of them have no way of knowing the changing Btu load of the structure in which they’re installed. In a zone valve job, ∆P style pumps only know whether zones are opening or closing. They don’t know the load because they don’t know how cold it is outside. They only know open or closed.

Myth: Push a button and it figures out everything for you

Again, ECMs aren’t plug n’ play. We’re talking about your profession here, your livelihood.  Seems to me that whoever’s perpetrating that myth needs to learn that many of us in the trade have greater respect for others, and ourselves.

They don’t size themselves, nor do they automatically adapt into the right size circulator. You still need to know pump sizing basics in order to program these things for maximum benefit.

Myth: I use ’em on zone valve jobs, but not on pump jobs

Did that tidbit about ∆P pumps not varying their speed in zone pump applications surprise you? Well, they don’t. So, is there a point to using a ∆P variable speed circ as a zone pump? You bet there is.

If you know how to program it (remember those two myths from above, “They always give me the right flow” . . .  and “Just push a button?”), you have the ability to adjust the operating speed as close to the system requirements as possible.

This has a couple of benefits:

Instead of using a circulator operating at 80 to 85 watts, you could conceivably satisfy a zone’s pumping requirement at 25 watts, or less.

By matching a circ’s performance as closely as possible to that specific zone’s flow and head requirement, we can minimize the industry curse of over-pumping and all of the nasty things that does to a system, such as: reduced system ∆T, resulting in boiler short-cycling, reduction of system efficiency, and premature wearing of all moving parts in the combustion and circulation cycle.

None of those things are good.

Myth: All a circulator has to do is make the water go round ‘n round

Of the three major components in any hydronic system — the boiler, the heat emitters and the circulator(s)— a compelling argument can be made that, of the three, the circulator is the most important in determining overall system efficiency.

That’s a lot more than just making the water go round and round.

The boiler makes heat, and the heat emitters — radiant, fan coils, baseboard or radiators, etc. — deliver the heat. But it’s the circ that facilitates the Btu journey, out and back.

Here’s the scenario: You’ve just installed your industry standard three-speed circ on a single zone of heat. That circ, no matter which speed you select (and we all know which one that’ll be) will deliver either a lot more, or a hell of a lot more flow than the zone needs under design conditions. That excessive flow leads to shrinking up the supply/return ∆T . . . and that leads to short-cycling, reduced overall efficiency and excessive wear and tear to all the important components.

And none of those are good.

Keep in mind that this unpleasant situation is under design conditions — when the system should be running at peak efficiency.  As it gets warmer outside, the circulator is still pumping at the same rate, even though the load has decreased, making the problem even worse.

The important point here is this: Most folks don’t consider this to be a problem because no one will ever complain that they’re cold and it’s your fault. You are delivering the heat, so from that standpoint, there’s no problem. But if you factor in a slightly (or maybe grossly) oversized boiler and oversized heat emitters, you’re further shrinking the supply/return ∆T, which leads to short-cycling, reduced overall efficiency and excessive wear and tear to all the important components.

And none of those are good.

We can do better.

It’s our job to make sure the customer gets the overall system efficiency, performance and trouble-free life they’re paying for. Putting a hydronic heating system together isn’t really that hard to do if your only goal is to keep people from freezing to death. A reasonably competent handyman can pull that off.

The professional, however, knows the components he chooses can either enhance efficiency and performance, or limit them. The real joy of using variable speed ECM circulators isn’t electrical savings (although it’s nice) and it isn’t the “magic.” It’s knowing you’re using the right tool for the job and taking advantage of the technology available to make sure circulator operation matches system needs as closely as possible. To do that, you have to know what they do, how they work and how to program them. It’s not hard, but it’ll make your systems as efficient as they can possibly be and will enhance the life of all the important components.

And all of those are good.

END_OF_DOCUMENT_TOKEN_TO_BE_REPLACED

Taco Comfort Solutions® has expanded their family of easy-to-use, ECM high-efficiency circulators with the addition of the 0034e™ and 0034ePlus™...