The renovated, 277-room Renaissance Providence Hotel suffered from air in the hydronic piping system, which led to micro-biological induced corrosion that was causing a galvanic corrosion process in the piping. 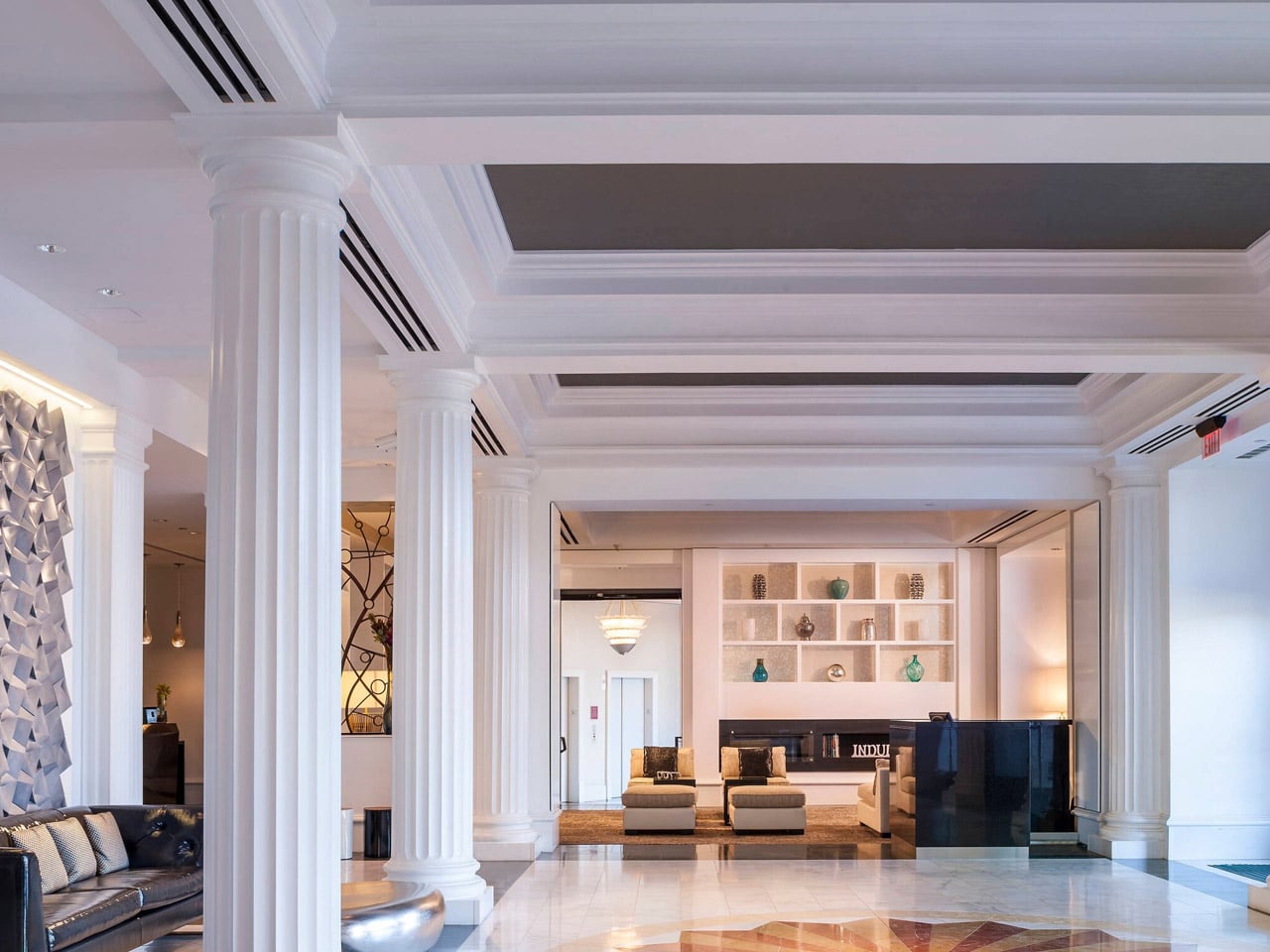 In the hotel business the most common guest complaint is over room comfort, specifically air conditioning. Described as being a “killer” in customer satisfaction indexes, this is exactly what happened when the Renaissance Providence Hotel, an upscale brand of the Marriott family of properties, opened its doors in the summer of 2007. Developed and operated by Sage Hospitality of Denver, the hotel has an HVAC system based on the Taco LoadMatch®-IEC fan-coil single pipe system. With two Taco circulators per fan coil, there are 544 installed LoadMatch circulators for the hotel’s 272 rooms.

Affected rooms, normally cooled to 72ºF dry bulb and 58ºF in summer, were stuck at 75ºF dry bulb and a humid 64º wet bulb, and guests, making their first stays in the renovated property, were not happy. In order to restore comfort for the guests, the hotel’s engineering department faced the daunting task of cleaning and/or replacing a high number of system components.

The underlying problem was air in the hydronic piping system and, more specifically, the development of corrosive iron oxide created by the oxygen present. (The hotel’s domestic water was never affected.) In draining system water in weekly cleanings, a high degree of sediment was found to be present. The big question then was how to get rid of the air and the associated gunk by purging the system, and how to do that without shutting down the hotel in the process. According to Steve Beretta, the hotel’s director of engineering, it was a “challenging situation” for a brand new hotel.

Having been called in on the problem, Taco LoadMatch experts led by Greg Cunniff, P.E., Taco’s applications engineering manager, had a solution in mind. Greg felt that the common standard type air separators installed in both the cooling and heating mechanical rooms were inadequate for a problem of this magnitude. Initial tests on system water indicated that the gunk could be micro-biological induced corrosion (MIC) that was causing a galvanic corrosion process in the hotel’s piping system. It was necessary to purge the system of the oxygen that the microbes were living off and creating the iron oxide corrosion problem. 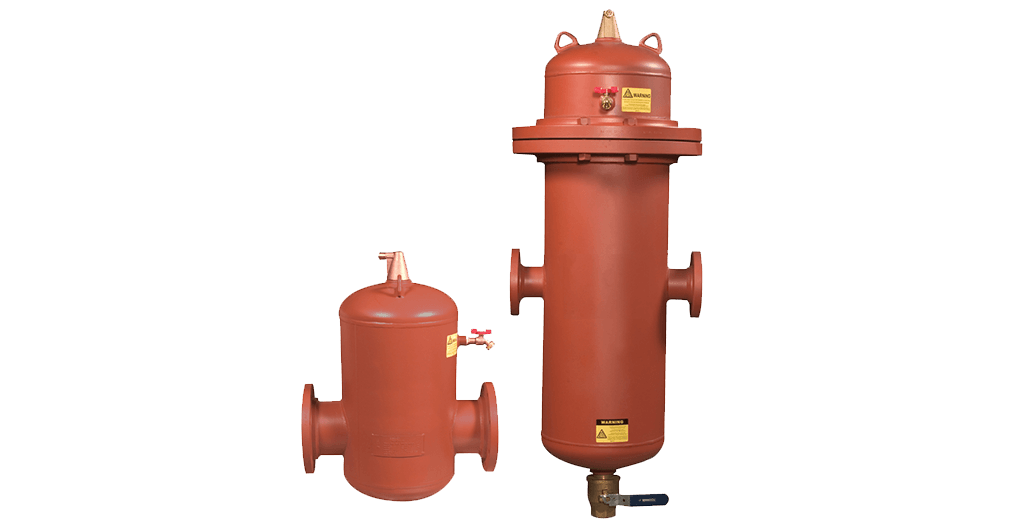 Draining the entire system and then flushing it with an acid solution would require shutting down the hotel for the duration of the work, a costly proposition and a potentially damaging one to the property’s reputation. Cunniff suggested a different approach: Taco would replace the hotel’s two air separators in separate off-season actions, starting with the chilled side. That way there would be limited complications and the least amount of affect on guests. What was needed was a more powerful separator, one with air and dirt elimination capabilities — Taco’s 4900 Series, specifically the 4900- AD (Air & Dirt) model separator. Introduced in 2005, the 4900 Series was designed for the complete elimination of air from closed loop systems. The key to the 4900 Series’ effectiveness is its use of patented stainless steel PALL rings. Pall ring technology is widely used in the processing industry to mix or separate gases from liquids. Using PALL rings in hydronic air separation allows removal of microbubbles, sand, dirt and rust. Air bubbles are separated by the PALL rings through a process known as coalescence; dirt particles are caught and sifted to the bottom of the tank, where they can be removed through a blowdown valve.

So convinced of their efficacy when it came to the Renaissance Providence Hotel problem, Taco donated two 4900-AD separators and helped install them in separate middle-of-the-night operations (again to minimize disruptions to hotel operations) in the spring of 2008 (for the chilled side) and then again in the fall for the heating side. Once operational, the system water, now being starved of oxygen, began to show improvement right away, according to Steve Beretta. In four months’ time the problem was gone and heating and chilled system water had turned clear and sediment free. Having been in hundreds of mechanical rooms over a 40-year career in the hydronics industry, Taco’s Greg Cunniff has only encountered about a dozen MIC-type situations. “It’s a bit more common in fire protection systems than hydronic systems,” he says. In any event, Taco’s 4900 Series Air & Dirt Separator demonstrated that it’s up to the toughest air and dirt problems. 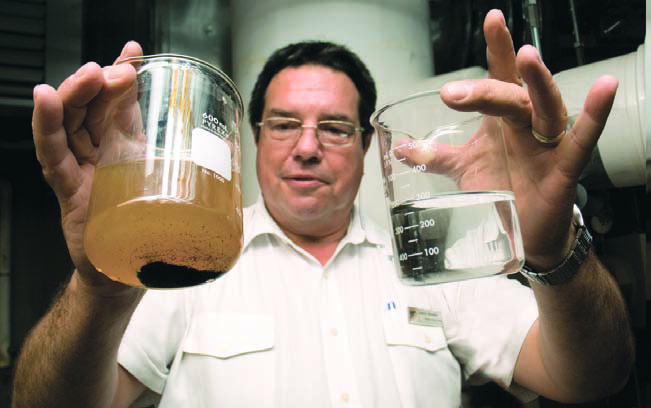 Steve Beretta, the hotel’s Director of Engineering, holds a beaker full of the crud and gunk that collected in the new hotel’s hydronic piping, and compares it to the clean, oxygen-starved water from the system after installing Taco’s 4900-AD separators.